More photos from the Manchester Junior Chess Congress. Held on the 15th December at 3Cs.

The one day junior congress held at 3Cs provided plenty of success for the host club against many of the top young players in the Greater Manchester region.Ben Newton won the "Kings" competition with Akil Balakrishnan and Tim Ye finishing joint third while Zayeem Alam was victorious in the "Knights" section. The Open event saw a three-way tie at the top - all 3Cs' players - namely Alannah Ashton, Lucas Chan and Hunain Malik. Ben Newton also gained a prize for correctly answering a series of chess puzzles that were provided during the eventThe group photo is of (left to right) Tim Ye, Akil Balakrishnan, Zayeem Alam and Ben Newton while the individual picture is of Hunain Malik. 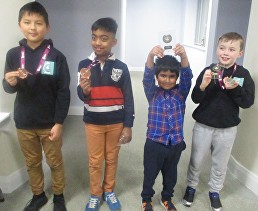